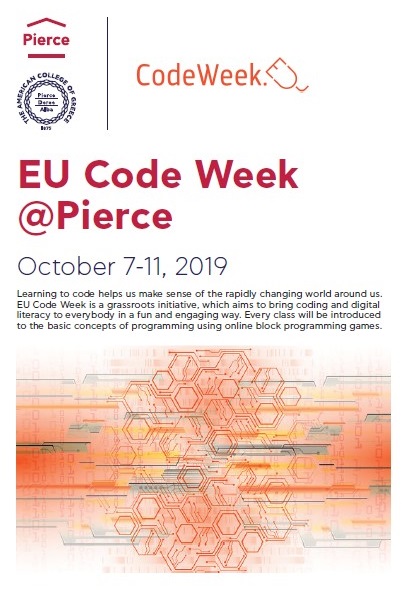 Once again this year, the students of Pierce – The American College of Greece had the opportunity to program inside and outside their Computer Science classes!

In the context of EU Code Week, which is an initiative of the European Union and aims at the active involvement of young people in the process of programming, Pierce students redefined the value of coding and programming as well as the role they play both in our daily lives and in the sciences!

During the week of October 7-11, 2019, Pierce Computer Science teachers, in response to the call of the European Union, organized activities that were appropriate for every age group and aimed to introduce students to, and to broaden their knowledge of, the concepts of the algorithm and the principles of structured programming. The activities took place in visual and text programming environments. In A Gymnasium, the students worked on the Tynker graphic computer programming platform. In B Gymnasium, they worked on the Lightbot graphic computer programming platform. In C Gymnasium they programmed the visual robot of the Robomind Academy. The students of A Lyceum that have chosen the elective class in Computer Science had the opportunity to work on the activity “CodeAthon 2019: Improve the game…and play Scratch!” Finally, B Lyceum students work on the Python language, working on an electronic game.

These activities demonstrated that programming is an important component of modern life! Our students’ experiences were enriched! At the same time, their knowledge and skills were reinforced and they had the opportunity to change their attitude regarding programming!

The coding goes on!