With their outstanding performance on the Panhellenic examinations, Pierce Seniors 2020 confirmed the methodicalness, diligence and dedication to their goals and demonstrated the systematic and comprehensive daily preparation in the classroom by their teachers. With their admission into institutions of higher education and, indeed, top schools, Pierce graduates have taken the first important step towards achieving their goals.

97% succeeded in being admitted into institutions of higher education, six out of 10 have been admitted into schools in Athens and Piraeus, which is an important factor at a time when the cost of studying in another city and the health crisis causes problems for many families.

75% of those admitted succeeded in entering high-demand schools. More specifically:

Congratulations to the graduating class of Pierce – The American College of Greece on their excellent performance and high grades on the Panhellenic Examinations. Despite the challenging circumstances of this school year, our graduates reached the top, with nearly triple the Panhellenic percentage of excellent grades (over 18,000 points)!

More than 35 graduates of 2020, taking advantage of the 50% scholarship on tuition fees enjoyed by Pierce graduates, chose to continue their studies at Deree – The American College of Greece, either full-time, or in the Parallel Studies program along with the public university into which they were admitted. At the same time, more than 20 Pierce graduates were accepted into top universities abroad and, most of them, with full or partial scholarships:

Our students were prepared in the best way, attending classes both in the classroom as well as online and they studied with the ongoing support of our teachers. Upon the announcement of their grades, they see that their efforts being rewarded and their dreams coming true! 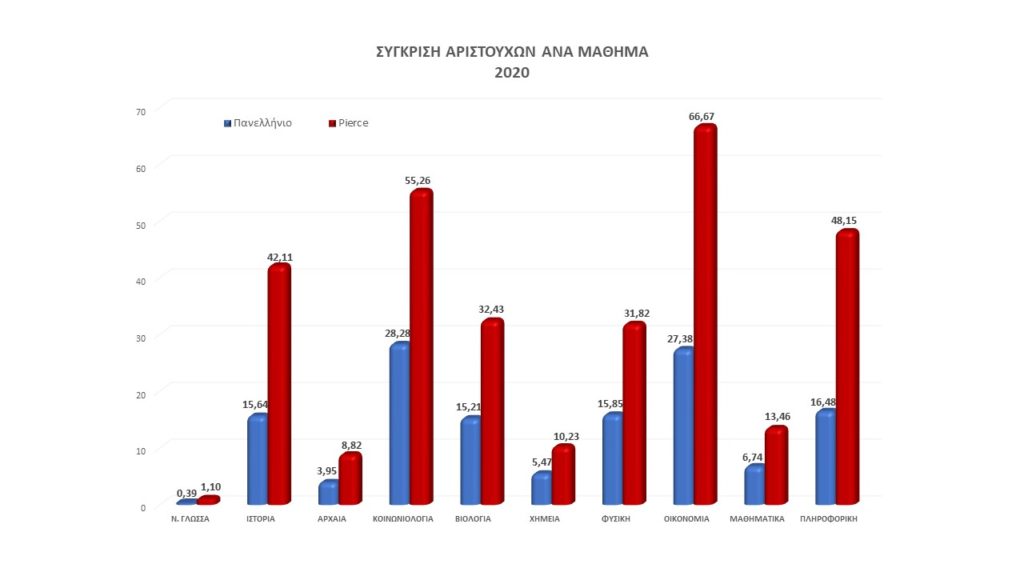 At the following link, you can see our students’ scores in all subjects, in comparison to the Panhellenic Average.

Excellence and distinctions are the reward for our students’ efforts and make all of us, both teachers and school Administration, particularly proud of their successes!